Come in B-B-Q, we have a mission for you from Earth's Mid Lake station.

B-B-Q your breaking up! Your thermal levels are uncontrollable, please be advised to close the dampening hatch.

Steady as she goes B-B-Q, fuel levels are nominal. 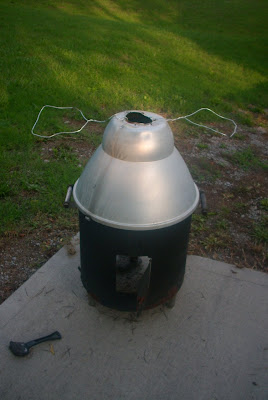 The other day I was poking around trying to help my little smoker perform more like a grill by adding the aluminum flare from an old baseball field light. After I fashioned handles I noticed the smoker looked somewhat like a sad little robot burnt from re-entry into the atmosphere. So I started the cosmic communication transcribed above for my own pleasure. My neighbor most likely overheard my ramblings, but I was having fun being a kid and not making matters worse.

Update: My wife says I need a hobby.

No End in Sight

We may need to go see this film my fellow Americans.

To question your country's leadership is your duty as a citizen. Anyone who says questioning an elected official is anti-American is just plain making matters worse.

This little video really made me understand the term Chickenhawk. Give it a watch it can't make matters any worse. 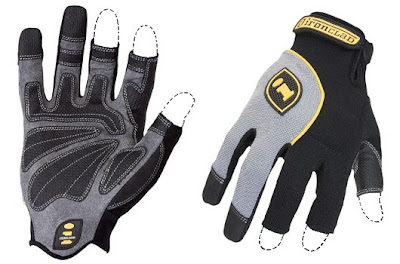 Y'all know how I like posting about things I use at work. Well, I got me some new gloves, and I am going to tell you about them after I tell you something else.

Today as I was locking up the bays at work when the main electrician for the Facilities department came up and said he really liked what I had done with the lights at one of our river parks.

Now let me back up a little and tell you about this man. He is a difficult case to say the least. Don't get me wrong he ain't evil all the time, just real-real unpredictable. I was his main helper for about nine months and I found the best way to deal with his polarity shifts was to keep moving. I figured a moving target is harder to strike. Don't get me wrong either, there were times when I was up the line from him and wanted to send him a little 480 volt surprise when he was in a real rude mood. Just a little humbling heart failure. I hope you all know I wouldn't, but it did cross my cross mind a time or two.

Now back to this rare at-a-boy to me. Months back I designed and built these heavy expanded steel HID light fixture coverings/replacement lenses that look like something built for the set of Mad Max. Because folks kept throwing rip-rap at them or shooting them to get some night time privacy while parked there. Some things I just don't want to know, don't make matters worse by being a witness I always say. I remember an old saying that said something like: A bad man gives a good man a job. Anyway my grumpy co-worker said I did a great job.

I would like to not so subtly change the subject back to my new work gloves. I have a pair of others that I use for climbing that have fingers, but I am thinking I may use these for everything, because they are just too dang handy (punny I know)! I can wear them for hours with the greatest of comfort and they make my hands feel much stronger.

If you see Jed around town just shout out, "let me see your gloves" and I will know you know at least as much as I know. 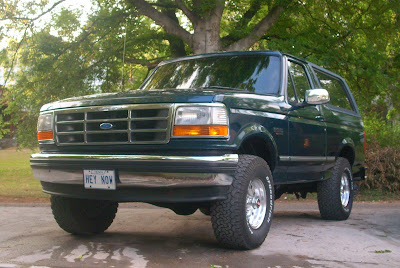 Well I hate to jinx it, but things are looking a little better around here for me. I got me a new Ford Bronco, new to me anyway. She is a sweet 1994 XLT (middle year of the fifth generation of Broncos) model with a kind set of pipes (Flowmasters) that sounds like the tuned rumble of four Harleys. It is a cool teal green color that sometimes looks black and sometimes looks blue. She is sporting tint on all the glass that's way past too dark. On a sunny day, it always looks like a storms a comin'. I think someone loved her with passion before we met.

If you will remember I sold my other Bronco due to its transmission dying. Then it came back, for a while. I have another now because I have never found a vehicle I liked better or found more useful. This is my third Ford Bronco. My first was a third generation type (1986 the last year of that generation) with the Eddie Bauer package. My second was a fifth generation (1992 the first year of that generation) Custom package. I am very excited to have it and it is nice to have folks take a second look and say, "Nice Bronco Man."

It is nice to drive a motorcar that has appeal in muscle car circles as well as four-wheel gear heads.

She is wearing the "Hey Now" tag my others wore, as well as a Dead head sticker my daughter gave me .

I call it my small penis compensator to know my caste in life and not make matters worse.