I am one of those folks who thinks something fishy was going on the day the towers fell down. I know you are going to say that I am nuts, but I already admit to that so you ain't got a hard fight to prove that.

I am going to start handing out these bills. You can see them here with live links.

Making a mark on the earth 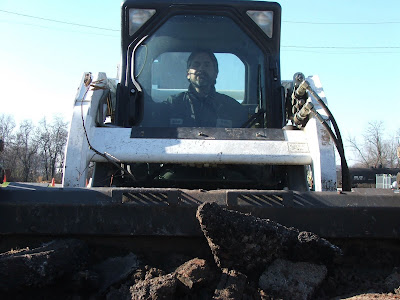 Some men make a mark of their time here on earth with clever words or beautiful art. Jed just scratches around lost most of the time.

Christmas left me feeling a bit like a failure as a husband, father, friend, son, grandson, brother, grandfather, employee, or any relationship I can ponder. I suspect it is the season, not Christmas, but winter that has me sour in the emotional stew.

I know I always show myself working on things in high up places, but sometimes I have to get down below the earth of this scrappy little city and help repair a bad connection. Basegasket snapped this one of me when we were working the Christmas parade and found some shaky voltage that was to supply the center broadcasting area with a few million candlepower of light. Here I am waiting on KUB to kill the main feed so I can tie a lug on to bypass an ailing three phase switch. I thought I would just stay put rather than crawl out to take a smoke break. 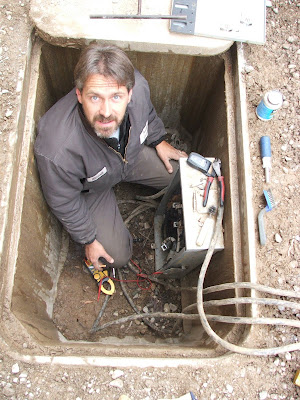 Here Basegasket and I are acting proud to have a new device to take care of Downtown. We don't know much about keeping a clock working, but that ain't going to stop us from fixing it if it needs fixing. Notice I am still wearing the dirt from the afore mentioned electrical vault. Also notice my tall cohort wearing his new Turtle Fur® cap. 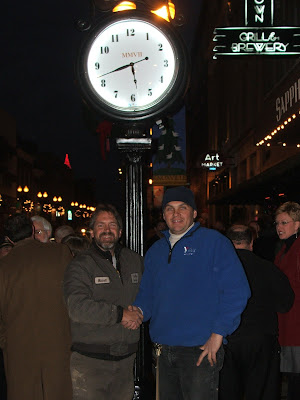 Having smart and able coworkers sure don't make matters worse. It appears he will be moving to work for these guys soon and will be missed.
:: posted by Tennessee Jed, 6:23 PM | link | 5 comments |

Image of a 1979 gas coupon that was
proposed and never enacted.
We are worried about WWIII while WWO (world without oil) is creeping up on us. WWO is a finished ARG (alternate reality game) where a multitude of participants penned the various aspects and ramifications that could occur during the economic model known as Peak Oil. Since the game ended, one of the creators fashioned a blog to follow news stories paralleling the games suppositions and compiling the scenarios that unfolded during the game in an orderly form for posterity's sake. They are working on a short film to post to YouTube that will be released soon as well.

Jed being the Heuristic Prophet of the Obvious that he is has been watching this Peak Oil theory for a time now and this WWO Blog will be added to his links for all of us to use. He is suggesting you take a few browsing moments with them to consider what the fleas will do if the dog dies. Jed is fascinated with greed as it is inborn on the cellular level of all living things. Looking at how every living thing consumes its host to death. Crops rob the soil, cancer kills the animal and people consume everything they can until it is over. Jed knows Mother Nature will take it all back in her time.
Side Note: I enjoy speaking about my pseudonym in the third person as if it is another human all together.

This ain't here to worry you it is here to make you think, and thinking don't always make matters worse.

Invite Jim over for Christmas

I love it when one of my blogger buddies brings a link that makes me smile a big old smile. Reading Domestic Psychology can't make matters worse.

It had to be here

Something happened the other day that makes me glad I live in this scrappy little city in the heart of our Appalachian valley. Can you believe freemen wondering the streets taking out traffic cameras? Local news and National news found it interesting enough to give us the scoop.

Sure they tell us it is for our safety, but statistics indicate that timing of yellow lights are a superior safety improvement over the threat of a fine. Let us not forget other "crimes" such as not wearing seat belts when we don't require it for our children on school buses. This type lawmaking does not have a thing to do with public safety. I guess it is better to get a taser shock than a bullet too, but there are clear rules about using bullets as well as facing ones accuser.

This particular camera is the closest one to Jed's house and it is obvious to me it is a fee grabber for a ridiculously designed intersection. I normally drive dangerously slow around it just to be sure I don't get hit with a fine.

I don't condone disobedience of the law, but there is coming a time where the stress of too many taxes and laws will rue the vile action of the people. If we the people don't veer from this path of acceptance of corruption and twisted laws it will make matters worse.