Once more Jed sits with a heavy heart and whittles. I guess one can call cutting glass whittling. 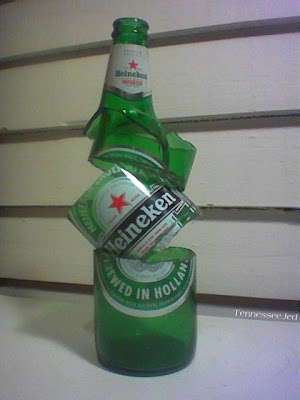 Either way It don't make matters any worse to have a beer after cutting the grass, then cut the glass.

Hey now! I got a nice letter from the folks who run this blog about Knoxville and I like them. They sum up Knoxville's blog scene and offer other useful information about things going on around here. They also offer a handy iMap applet for things specific to the Knoxville influenced valley. I am adding them to Jed's Links for future browsing. If you are interested in this little part of the big old world look to these guys to give you the skinny.

Try and not make matters worse, which is harder to do than change things sometimes.

So we loaded up the truck and moved to Nantahala (for a couple of nights). Trees, that is, never cut, very protected. 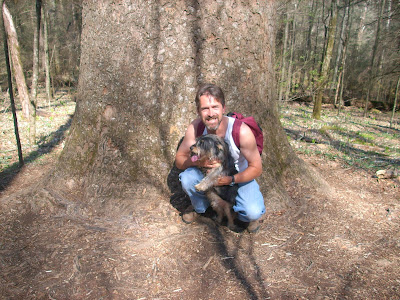 Here is a photo of Jed in Joyce Kilmer with his faithful mutt
Sam I Am (heart of a killer, golf ball sized mouth).

The Ides of March was a good day for Jed. 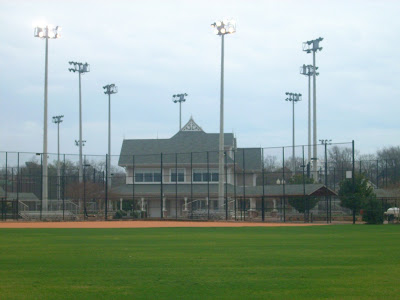 Caswell Park in the heart of East Knoxville has
four full sized Baseball fields and a nice field house.
Have you sat at a baseball or football game at night and thought about who would climb the poles and work on the lights? If you did you most likely thought the person would get paid really well...right? 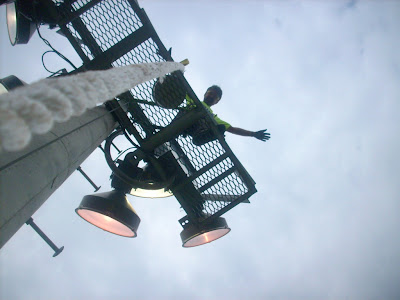 This is one of about forty poles in Caswell park notice in the top photo
how there is a light not working, that is my mission. In the bottom photo
Jed is waving high to say all is well. I wait as the repaired light warms
up and comes to the proper brightness and think about Julius Caesar.
As I climbed I thought of how silly I was for doing this for $5.50 clear per hour after taxes, health insurance and child support. The comforting part was knowing it gets those things paid. Further discouraging thought was how when I spend my clear money it gets taxed 9.5% sales tax even at the grocery store.

Anyway it is an adventure to do these things and it beats slaving away at some factory. It makes me appreciate my good health and the fact I am alive today. 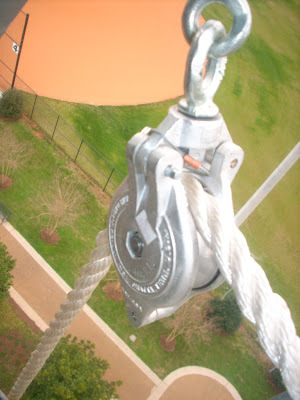 This nice little machine is a line-mans pulley, it is super light weight
and very strong. Best of all it is made right here in Tennessee. When
my boss bought it the man who sold it told him he would only sell it to
us if we promised to care for it properly. We have it nested in a bucket
with nice soft rope when it is not being used (out of the weather
of course).

Most of the time the problem is a 1000 or 1500 watt metal halide HID lamp which is about the size of a volleyball and has several working parts on its interior which has to be carefully handled. About 20% of the time it is something other than the lamp and takes a little more work. Below are two photos where I removed the ballast and capacitor for replacement and placed them in a bucket to be hoisted down. 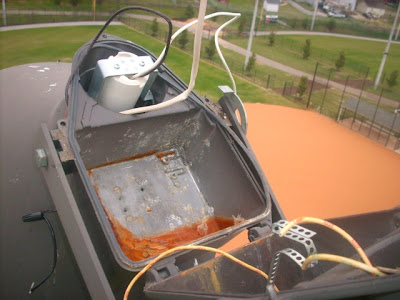 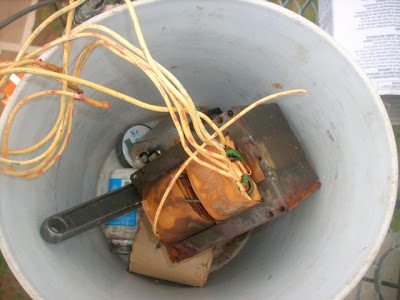 You all know Jed can't leave without writing something on the back of the lens housing for the next poor bastard to read and not make matters worse. 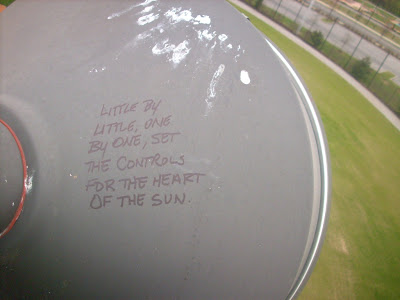 Pink Floyd lyrics always work best when you are high.
In fact it is so high only crows visit daily, they leave their
marks as well. I let them keep the top billing.
:: posted by Tennessee Jed, 9:23 PM | link | 9 comments | 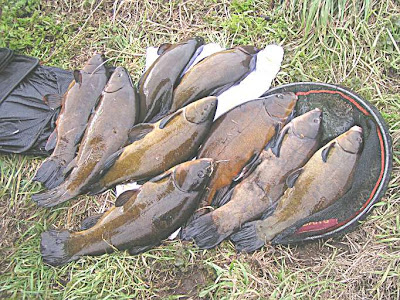 If wishes were fishes for eating it would not make matters worse. 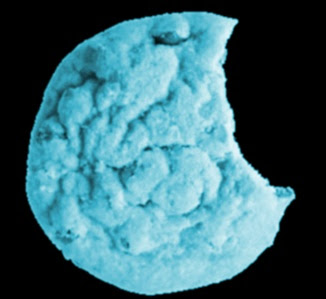 As I watched the lunar eclipse tonight I thought it looked like a pale green cookie with a bite crunched out. This time when the moonrise started the moon was invisible because it was already in the shadow of earth (known as umbra). When I did start to see the moon it was pretty high above the horizon and a light spot was visible to the lower left side of the dark disc (known as penumbra). So as the eclipse event was near the end it looked much like the Jedited image above.

I think it will be kewl when we have condos on the moon and we can see the earth move in front of the sun. It would be a nifty thing to be on the moon when it blocks the sun coming to earth in a solar eclipse too. We would see a dark spot move across the face of earth. Will we call it a "Terra eclipse" to not make matters worse on the moon?
:: posted by Tennessee Jed, 8:23 PM | link | 4 comments | 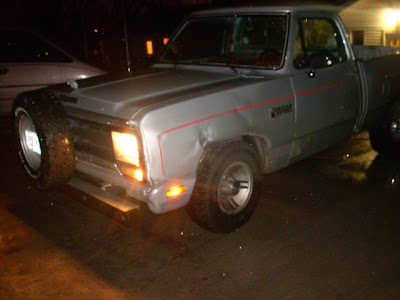 I am sitting here wondering if I could have taken the Hybrid car deduction on my old Dodge (noun and verb), since I have to push it as often as it uses gas. Much of the time I am burning lots of corn, beans, rice, oats and cheap chicken parts while I push and pull the beast around.

Someone must ask these important questions to not make matters worse.